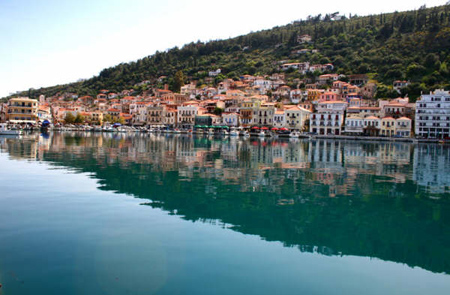 Gythio is a small city in Laconia, but the biggest city in Mani. The architecture and the atmosphere of the town is typical of the Greek sea atmosphere, as well as that of the Greek islands.
In Gythio, and its beaches extending for many miles, you will find fresh fish taverns, restaurants, cafes and bars.
In Gythio you can take a stroll through the narrow streets which reach the top of the mountain. Once you reach the last path to the top, you will see a small beautiful chapel from where the view is astonishing. You will have the opportunity to take a swim at its beaches that stretch in both sides of Gythio.The Ancient Gythio just north of the current Gythio, opposite of the island of Kranai and SE of Aegis. From the ancient town there are still preserved ruins of buildings with mosaic floors, an aqueduct, the temple of the emperors Augustus and Tiberius, the baths and the theater since the Roman times.The lighthouse was built in 1837 and is 23 metres tall.The girls-only educational institute, which was built in 1886 by the architect German architect Ernst Schiller and the Municipality, which was built in 1891 by the same man, as well as the Ancient Theatre which was built in the first years after Christ.The Archaeological Museum is housed in the City Hall and contains a Byzantine collection. Among the hosted exhibits, they stand out the inscriptions engraved on stones of the Archaic Age, pottery artifacts and a few statues of Roman times.

Githio : Hotels in the area

Just 2 km from the picturesque Gythio on the beach of Mavrovouni is located the hotel of Demestiha family that includes Demestichas apartments and rooms for rent.

"Cavo Grosso" bungalows are built over the unique four-mile long beach of Mavrovouni by the crystal clear sea of the Laconic gulfs just a mile's distance from picturesque Gythion.

Milton Hotel is ideally located on Mavrovouni hills, just 2 km from the center of the traditional town of Gytheio.

“Little Village” is a by the sea complex of suites built in an area of 25.000 sq meters full of trees and flowers.

The newly-built hotel-cluster of apartments is expecting you in Vathi, Githeio.

The EF ZIN newly-built cluster of apartments is expecting you in Vathi, Githeio.

Welcome you in “Stauros tou Notou» it is a news hotel group precisely on the beautiful beach of Mavrovounio which rewarded with light blue flag for its cleanliness.

More hotels in the area